Detroit Mountain Recreation Area is expanding its footprint and adding some fun new features thanks to a $1.2 million grant from the state's Legacy fund.

The mountain's leadership has already used the grant dollars to acquire nearly 150 additional acres for the property, and plans are underway to develop a treehouse and playground area, create some new bike trails, add paving and landscaping around the tubing hill, and make other improvements around the grounds, all within the next year or so.

The grant award was officially announced this December 2018, following final approval by the Minnesota DNR. The application included a master plan for Detroit Mountain, which laid out the specific projects the grant funds will be used for.

Of that, $687,000 was already used in January 2019 to purchase 147 acres of land adjoining Detroit Mountain's existing property. (That grows the recreation area's footprint significantly, from its original 200 acres to 347 acres.) Another $314,000 will be spent on trail development, $260,000 on the construction of the treehouse and playground, $165,000 for paving and landscaping around the tubing hill, $140,000 for design, engineering and administrative work, and $30,000 for some additional signage.

The newly acquired acreage lies on the west end of Detroit Mountain's original property. Some of that land was already being leased by the mountain and has some mountain bike trails on it now, Plans call for the addition of another five miles of single-track trails, as well as two to three new downhill, or gravity trails. 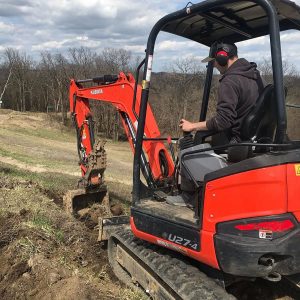 The treehouse and playground will both be natural-material, four-season structures. The treehouse will be located off the edge of the beginner ski hill so kids can ski right up to it in the winter; it'll be connected to the playground. Though the structures are still only in the beginning stages of design, they expect they'll incorporate a lot of natural elements and be exploratory in nature, with observation decks, ladder bridges, a climbing wall and possibly a slide. Detroit Mountain is working with Land Elements of Fargo on the design.

These projects, along with the paving and landscaping projects planned for the tubing hill area, will be going out for bid soon, and with any luck will all be completed by next spring.

Detroit Mountain Recreation Area opened in November 2014 and was designated as a Regional Park by the Greater Minnesota Parks and Trails Commission in 2015.